Top Ten Strange Wedding Traditions From Around The World 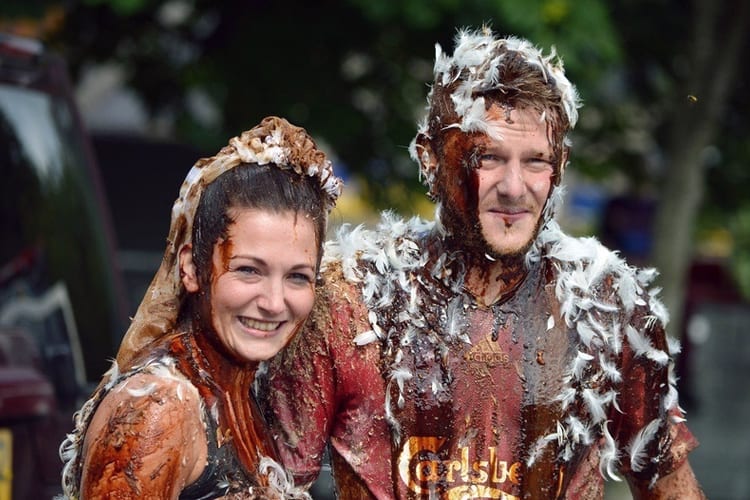 04 May Top Ten Strange Wedding Traditions From Around The World

Posted at 13:36h in Weddings by Musa Bwanali
Share

There are some bizarre wedding traditions around the world. What comes to mind when you think about weddings? A beaming bride? The dad leading his daughter down the aisle? Drunk uncles passionately dancing to Dad Rock? Weddings are all about traditions, and if you’ve been to a British wedding, you’ve seen at least some of the above happen at least once.

But if you travel the globe, you’ll find some traditions that make the ones above seem pretty drab.

#1 – Pelting The Happy Couple With Rubbish

Marriages are supposed to stand the test of time. So how can you help a couple’s marriage survive the ups and downs of life? The Scottish believe that rubbish is the answer. Before the wedding, the happy couple is assaulted by a rubbish-throwing friendly mob, often getting hit with rotten eggs and fish. The theory is that if the couple can stand up to this, their marriage can survive anything.

Usually, we associate weddings with big smiles. It’s common for the bride’s and groom’s face to get tired from so much grinning.

Why? Because if they smile, it indicates that they’re not serious about their wedding.

The Tujia people in China, it’s not all smiles and giggles. For one month leading up to the wedding, the bride is encouraged to weep for one hour per day. Because if there’s one thing the wedding industry needs, it’s more weeping brides.

What’s your worst wedding nightmare? Something catching on fire? Passing out? A runaway bride?

How about losing control of your bowels or bladder?

In Borneo, that’s a real possibility. One particular tribe doesn’t let the groom or bride leave their house all day, even to use the loo. Apparently, it brings good luck to the couple.

#5 – You Want Your Bride? You’ll Have To Come Through Us!

In China, grooms often have to “get through” the bridesmaids to get to the bride. First, the bridesmaids demand money from him, then they force him to perform a series of silly and ridiculous tasks before they finally grant him access to his bride.

In parts of India, girls born during particular astrological periods are said to be cursed. This curse will cause an early death for their husbands. The only way to break this curse is for them first to marry a tree. Yes, a tree. Then the tree is cut down, which apparently breaks the curse.

#7 – Drink That Toilet Till It’s Empty

Although this tradition isn’t as popular as it used to be, an old French tradition advocated that new couples drink all leftover alcohol from a replica toilet bowl.

You know what a groom really needs on the night before his wedding? To have his feet beaten with fish and canes. At least that’s what some South Koreans believe. Apparently, beating the feet is a test of character, and those who endure are worthy of being married.

Frankly, this sounds like a lot of fun. At traditional German weddings, guests bring some type of porcelain for the bride and groom and then smash said porcelain. Apparently, the act of destroying the porcelain wards off evil spirits.

What doesn’t sound so fun is that the bride and groom are expected to clean up the mess afterwards so they’ll learn that married life isn’t always easy, but they can overcome any challenge together.

In the Marquesas Islands of French Polynesia, after the wedding is done, the relatives lie down on the ground facedown, and the couple walks on them as if it were a rug made out of people.

Any of these you’d consider adding to your big day?